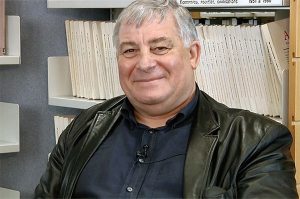 It is with great pleasure that we announce that our new Honorary Fellow for 2019 is Emeritus Professor John Drakakis.

John is Emeritus Professor of English Studies at the university of Stirling. He has also held visiting professorships at Wrexham Glyndwr University, where he was awarded an Honorary Fellowship, and at the University of Lincoln. He has published widely in the area of Shakespeare Studies and is the editor of Alternative Shakespeares, the joint editor of Gothic Shakespeares, Macbeth: A Critical Reader, and two other books of collected essays. Launching the Alternative Shakespeare series had a fundamental effect on the academic study of Shakespeare in Britain, alongside Dollimore and Sinfield’s Political Shakespeare. John’s determination to bring a range of theoretical approaches into the arena has undoubtedly changed the way all academics have reconfigured their studies; it has been the starting point for provocative and exciting critical readings for a whole generation of scholars. He is also the editor of the Arden 3 series The Merchant of Venice, and Q1 Richard III. He has contributed essays, and articles and book reviews to a number of leading literary journals, and he is a member of the editorial boards of Textual Practice, Critical Survey, Sederi, Intercultural Shakespeare and The Anachronist, and he was on the founding editorial board of Shakespeare. He was a founding trustee of the British Shakespeare Association and was chair of its Fellowships sub-committee. He is an elected member of the English Association, and a member of the Academia Europoeia, and he holds an honorary D.Litt. from the University of Clermont-Auvergne. He is currently the general editor of the Routledge New Critical Idiom series, and is the general editor and contributing editor in charge of the revision of Geofrey Bullough’s Narrative and Dramatic Sources of Shakespeare.

John will be presented with his Honorary Fellowship at a special event during the 2019 BSA Conference in Swansea.