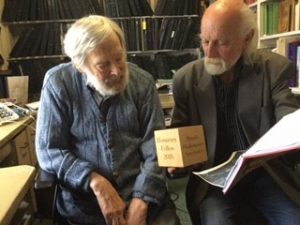 John Barton receiving his honorary fellowship of the BSA in 2017.

The British Shakespeare Association is saddened by the death of the great Shakespearean John Barton on Thursday 18th January 2018. John was awarded an Honorary Fellowship of the BSA in 2016. His trust in the richness of Shakespeare’s scripts, and in the ability of actors to express that to playgoers made him a generating force in Shakespearean production.

His generosity was renowned:  ‘actors of whatever age and experience loved working with him, for you always learned something new’ (Cicely Berry). As Shakespeare wrote in Antony and Cleopatra ‘The breaking of so great a thing should make a greater crack’: John was a powerhouse of Shakespearean performance and we mourn his passing.