Teaching Shakespeare: Readers have their say 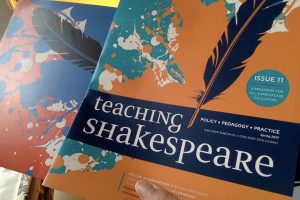 In late 2016, members of the British Shakespeare Association, specifically readers of and contributors to Teaching Shakespeare, were invited via links in email newsletters and on Twitter and Facebook to complete a ten-minute online survey on their experiences of using the magazine. The survey is designed along the lines of a ‘customer satisfaction’ survey, to find out what readers like about the magazine and what improvements they would like to see made. To date, only nine responses have been received (to put that in proportion, that figure represents only four per cent of the magazine’s average readership on academia.edu and probably less than 1% of our overall readership across the BSA, TES and hard copy platforms). The survey was launched during the busy festive season, but is still being promoted through the BSA newsletter and the survey will remain open at  for the next month, so please do complete it if you haven’t yet. It’s mainly multiple choice, so you’re welcome to quick-fire click! That said, looking through the responses so far, I’ve been really touched by the time and care taken by this wonderful handful of respondents to provide answers in the open comments sections in particular. Thank you! We are grateful for your support and we will take what you say on board as we more forward.

What did they say? Well, respondents, from the UK, Ireland, Bangladesh and Australia, unanimously rated Teaching Shakespeare better than comparable publications. 6 were educators, some with a research remit too, one was an arts practitioner, the other was a Shakespeare enthusiast. We didn’t ask for our readers ages but one proudly told us they’re now 94, and have loved engaging with Shakespeare since they were 12. We’re so happy to hear of your eighty years plus of Shakespearean enjoyment! Although they read the magazine in different ways, most prominent were reading online (some downloaded the PDF version or printed it out) and reading selected articles (rather than cover to cover). 5 had read most issues, 1 every issue, and 1 a single issue. All respondents were very satisfied (6) or satisfied (3) with the magazine. 7 said they were very likely to recommend it to a friend, 1 was likely, 1 unlikely (but did not use the comments box to say why). All but one respondent said they were very likely to read the magazine in the future. Features liked included the variety of articles, insights and experiences represented as well as the images selected. One person commented regarding preferred changes to the magazine, that they would like to see ‘more practical application to classroom practice’. Asked how they would sum up the magazine in a word or phrase, respondents said ‘insightful’, ‘informative’, ‘informative and interesting’, ‘relevant’ and ‘a very necessary gap that has been filled’.

We’re mighty glad we asked you! And we look forward to a few more responses in the coming weeks.