Like the play itself, ‘bold, bloody and resolute’, this extraordinary new Macbeth film (dir. Kit Monkman, 2017) is a forceful reimagining of Shakespeare’s most famous tragedy. Ahead of securing a distributor, the film is being pre-released to sample audiences, and we were fortunate to attend a screening at the York International Shakespeare Festival (20 May 2017). The film was also shown at the Courthouse Hotel, London (15 June), and at the Gdansk Shakespeare Festival (30 July 2017).

Most distinctive about Monkman’s Macbeth is the virtual landscape in which the action unfolds. Shot against a green screen, with backgrounds, details and effects added in later, the film is purposefully anti-natural, inviting in viewers of a digital age well used to the creation of online environments. True to the tempo of online worlds, the film proceeds at an exhilarating pace. The camera roves impulsively and fluidly, matching its movement with swiftly articulated iambic pentameter. It swings around a sumptuously designed set, a ‘Scotland’ visualized as a revolving ‘other’ world (a kind of Shakespearean ‘Death Star’ or globe-shaped castle/fort adrift in the void). This is very much not the ‘Scotland’ of the ‘blasted heath’ variety and inherited representations; instead, an audience is presented with a universe in which outside and inside are delightfully blurred (is the moon inside or outside Macbeth’s room or both?) and in which ‘nothing is but what is not’.

Inside this setting, the camera is free to snake down, explore and sweep above as it glides uncannily through walls and alights on particular characters inhabiting the revolving world’s multiple layers. A wonderful example is when the probing camera circles and curves, spotlighting the murder of Macduff’s wife and children, only to shoot heavenwards and settle on the scene of the controlling Macbeth sitting at his desk. Such filming decisions place the audience in an intriguing spatial relationship with the Shakespearean text. Aided by the smooth enactment of the camera’s journeys, they also help us to appreciate how events unfold simultaneously. Whether it is an erotic meeting in the bedroom, or a visceral encounter on the battlefield, viewers are constantly alerted to actions that overlap and intermingle. Time, as this Macbeth conceives of it, is thrillingly, if unsettlingly, compressed and compacted. The effect is to suggest a beautiful moving work of art, a painting the artist is still in the throes of painting, an evolving composition characterised by ever changing landscapes and bodies. Computer graphics assist in the process of making the whole edgy and modern even as they also allude to conventional Renaissance aesthetics. 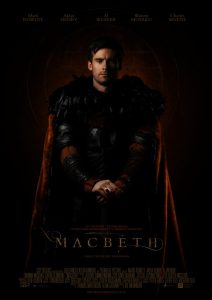 Contemporary reference points are achieved via an alluring amalgam of part-futuristic, part early-modern detailing. Whatever the period invoked, Monkman’s Macbeth retains an ability to be resolutely relevant. Hence, this Macbeth can invoke with impunity both Game of Thrones and ‘War on Terror’ vocabularies because the dominating perspective is with the here-and-now. The contemporaneous feel is of a piece with costuming as well as with the accelerated forward-leaning thrust. Characters appear in rich leathers or velvet (tellingly, the black-feathered outfit worn by Duncan is inherited – ‘borrowed’? – later on by Macbeth), and are always sensuous and sexualized – the Cawdor scenes take place in a tavern masquerading as a brothel, and, in the powerfully post-coital episodes between Macbeth and Lady Macbeth, the intense sexuality of their relationship is compellingly sketched. The play’s preoccupation with visualizing fantasy and desire is materially demonstrated in shots of endless stairwells leading upwards (to battle, to the throne room and to Duncan’s chamber), capturing the paradox on the surface and at the heart of the play. Nor does Monkman’s Macbeth shy away from the play’s signature property, blood. Green and grey hues, which tend to hold sway, are periodically engulfed by spurts of crimson, with the battle scenes conveying, through mutilated bodies, a fraught sense of masculinities in crisis. The relationship between Macbeth and Banquo is subtly drawn, and not least because its intense physicality – its restless rivalry and jockeying for dominion – stems directly from shared war-time experiences. Battle scenes are lent a particular visibility, fully delivering on the cues provided by Shakespeare’s play, and this is only to be expected in a film in which the trials and travails of the body in pain are continually in evidence. Cawdor’s jerky hanging or Macbeth’s head being delightfully dangled – these shock and impress as part of the film’s imagistic repertoire.

At the same time, the public complexion of such displays of physicalilty are offset by moments of engaging intimacy. Macbeth’s soliloquies are addressed direct to camera (the ‘Thane of Cawdor’ reflection is conducted as voiceover), meaning that, with this interpretation, the protagonist is discovered very much in terms of his personal narrative arc. We feel his pain, are witness to his tears and are given access to the emotional cost of his decisions (frequently through sustained close-ups) – a flawed hero cast accessibly. Macbeth experiences his environment subjectively and psychologically in a way that is vitally energized by the CGI-enabled production. Audience involvement is encouraged through self-conscious insertions. In the background, a projectionist/the porter runs a silent film adaptation of Macbeth (the 1909 Mario Caserini version) which, as well as allowing the witches (accommodated, as befits their status, in the darkest recesses of the revolving world) a foretaste of upcoming events, recalls how often this play in particular has been lent cinematic treatment. The self-consciousness is doubly generative. At once, it ingeniously puts into play Shakespearean expression, such as ‘Put on their instruments’, prompting us to identify this in-film projector, like the film’s external camera, as another representational ‘instrument’. At a deeper level, self-consciousness raises questions about how meaning is predetermined by film/theatre traditions or made ‘in the instant’ by actors and viewers. Who controls the multi-dimensional globe? The layers of self-conscious visual reference – from medieval tapestry to Renaissance paintings and early film – give an ominous new density to Lady Macbeth’s dismissive comments, ‘the sleeping and the dead / Are but as pictures’ and ‘’tis but the painting of your fear’, again anchoring the film’s investment in Shakespearean metaphor. But Monkman’s Macbeth is no slave either to periodicity or to its cinematic forbears. Rather, the emphasis is continually on the novel and the freshly-minted: the film abounds in original readings. Duncan is fascinatingly cast, his relative youth and masculinity working against the grain of the venerable monarch stereotype; Fleance sits on the edge of the world, contemplating his future; and the hired murderers hesitate, a gust of conscience interrupting their resolve. Here is a Shakespeare for and of the moment, an archetypal story repurposed for the present and invigorated by creative flourishes.

The ending, when it comes, brings us up short. Macbeth walks out of a sea of corpses, lurching to camera; for a moment, he appears triumphant. The ‘Tomorrow, tomorrow, and tomorrow’ soliloquy is wrenched from its earlier point in the play and centred here instead, as if the protagonist is taking the opportunity to reflect on hard won glories. But, abruptly, Macbeth is beheaded from behind, and falls to the ground; whether murder or self-slaughter, we are left to judge. Like so much else in this film, the final scene is an arresting instance of an inspiring and originally conceived interpretation. Should Macbeth be given the distribution it so richly deserves, a globally appreciative audience can be anticipated; with an eye to invention, and with its finger on the pulse of what is important, the film is a timely and deeply compelling intervention in the screen history of Shakespeare.