This is a guest blog post from Nicola Pollard, a member of the touring Bardolph’s Box production, sponsored by the BSA (http://www.uptheroadtheatre.co.uk/bardolphs-box/).

As I write this, we’ve been on the road for four weeks, Liverpool, Wigan, St Helens, Sittingbourne, Ramsgate, Deal, Whitstable, Gravesend, Dover and Ashford. Currently we’re in Sandwich Library, on a break between shows. We’re also playing in museums, theatres, arts centres and schools, for pupils and families alike. 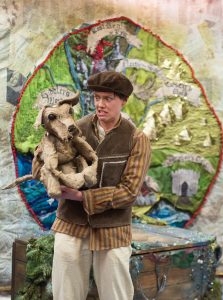 Bardolph’s Box is an introduction to Shakespeare’s plays for 8 – 12 year olds. I wanted to create a piece that illustrated the fun and joy prevalent in the stories, to try to get our young audience on Shakespeare’s side before they study the plays at secondary school. A long-time fan of the Bard, I believe in the power of the language, the skill in his expression to capture a thought or a moment.

Our key aim was to engage our audiences, with the text and with the characters. Through watching the performances it seems we have done just that. Our script invites the children to join in – when Bardolph first discovers The Box and seeks suggestions for how to open it, or when Prince Hal needs encouragement to feel a bit more majestic. The majority of our audiences contribute with gusto, suggesting magic words to open The Box, or more practical offerings such as ‘Lift the lid’… There have also been unanticipated contributions. Such as the children in Wigan who bellowed at Bardolph that this new Dromio was not the same as the previous Dromio, or the child who told Cleopatra that Bardolph was not here, he had actually left the room and gone down the stairs.

As a small-scale piece it is intended for more intimate spaces, with an audience of one or two classes. Alice Smith’s wonderful design has proved its flexibility and adaptability time and again: a pop-up frame covered with a gorgeously decorated backdrop, behind which we have the many costumes, props and instruments. Altogether we have 19 characters – backstage is carnage by the final scene! We also have The Box, a four foot by three foot masterpiece of carpentry and artistry.

Some of our performances have been free of charge, some had an admission fee. We wanted to make the production as accessible as possible, to enable young people to attend. The contribution from the BSA is much appreciated. Touring is an expensive business and securing additional funding to supplement the Arts Council grant proves that others believe in our production and what we are trying to do. The reward for me has been watching the faces of our young audience as the play unravels. One teacher emailed me to say it was just the sort of performance her underprivileged children needed, and they hadn’t stopped chatting about it all the way home. But one of my favourite comments, from a 9 year old audience member: Bardolph’s Box ‘made me feel all happy inside’. Then I’m happy too.