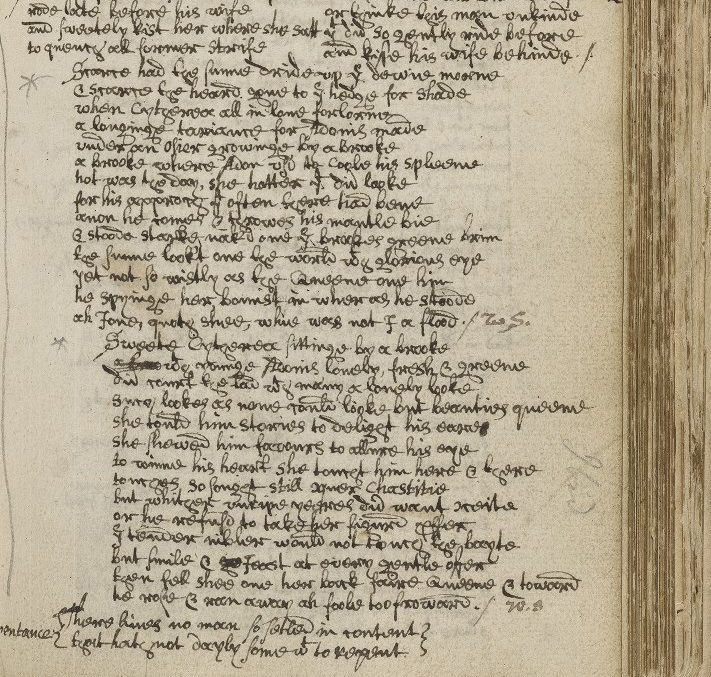 Congratulations to BSA member Dr Faith Acker on the publication of her first monograph, First Readers of Shakespeare’s Sonnets, 1590-1790 (Routledge, 2020). Read on to learn more from Dr Acker about her book and the process of adapting her doctoral work for publication.

What is now First Readers of Shakespeare’s Sonnets, 1590-1790 began a decade ago as research for my stuffily (and overelaborately) titled thesis ‘New-found methods and . . . compounds strange’: Reading the 1640 ‘Poems: Written by Wil. Shake-speare. Gent.’ My doctoral thesis vigorously argued that John Benson’s 1640 edition of the Poems should be distanced from much of the eighteenth-century criticism that had disparaged it, and should instead be evaluated against publishing and manuscript trends of its own time.

As I began to revise the thesis, however, I quickly realized that a book on John Benson would be difficult to sell. Those eighteenth-century critics’ commentaries have so deeply influenced our modern scholarship that Benson’s edition—despite much excellent twenty-first-century research by Sasha Roberts (2003), Patrick Cheney (2004), Cathy Shrank (2009), Megan Heffernan (2013), and Jean-Christophe Mayer (2016), among others—remains rarely taught and frequently condemned.

Thus, for First Readers of Shakespeare’s Sonnets, I abandoned my contextual and historical defense of Benson and thought instead about Benson as just one of many early readers of Shakespeare’s collected sonnets. In First Readers, I classify Benson and the sonnets’ other early editors and publishers as what I call ‘public’ readers and compare the evidence we have of their readings and interpretations to the readings and interpretations of their own readers, who examined these public texts at their leisure and did not necessarily expect to have an audience for their own reading practices.

Revisiting my archival research without my original focus on Benson and his edition, I enjoyed following in the footsteps—or penstrokes—of dozens of the earliest readers of the sonnets. Most Shakespearean (or sonnet) scholars will be familiar with many of the sonnets’ early public readers, including William Jaggard, Thomas Thorpe, John Benson, Edward Capell, and Edmond Malone. These men were among the most attentive and intentional early sonnet readers. Other fairly well-known sonnet readers adapted these poems into plays, songs, new poems, and collections of beautiful and recommended phrases (most of these appear in Chapter 6: Restoration Revisions: Musical, Dramatic, and Miscellany Readings). Far more early sonnet readers, however, remain largely anonymous; their encounters with these poems are evident in annotations on the pages of the printed books they owned or read, or reflected in their transcriptions of sonnets—or parts of sonnets—in manuscript verse miscellanies.

My engagement with the transcriptions and marginalia of these anonymous private readers revealed a rich array of textual interpretations. While much of the major sonnet criticism in recent decades (if not centuries) has focused on textual legitimacy and accuracy, the sonnets’ narrative, and the sonnets’ characters, the first readers of Shakespeare’s sonnets embraced a more diverse range of scholarly and analytical perspectives. Some—like the transcriber of sonnets from The Passionate Pilgrime in Folger MS V.a.399—prioritized the sonnets’ classical echoes. A collection of readers from Oxford University read Sonnet 2 alongside amorous, religious, political, and elegiac verses. The compiler of Folger MS V.a.148 not only prioritized religious and political imagery from the sonnets, but omitted most references to love and courtship in the long string of sonnet extracts he transcribed in his verse miscellany. Early eighteenth-century collectors celebrated the poems’ functionality as linguistic and rhetorical exemplars. Early sonnet readings were far more varied than those most often prioritized in today’s classrooms and criticism; I have highlighted about two dozen different themes and readings throughout the book, but many others remain.

First Readers’ overarching argument is that our canon of sonnet interpretations must be expanded to include more of these early and varied sonnet readings instead of exclusively reiterating the most popular eighteenth-century approaches. I intend this book to be a starting point not only for colleagues interested in the sonnets’ early texts and readers, but also for students struggling to read these often familiar texts with fresh eyes. To that end, I have defined many formal terms throughout the book, I have simplified my traditionally longwinded academic jargon to the best of my ability, and I have tried to make my chapters—and the sections within them—as brief and approachable as possible. I hope the sonnets will eventually, as the plays already are, be readily applied to circumstances and fields far outside their current critical purview.

First Readers of Shakespeare’s Sonnets, 1590-1790 (Routledge, 2020) is available to order here (at the time of writing this blog a limited preview is available on Google Books)

More information about Dr Acker’s research is available on her Academia.edu page and on her personal website: earlymodernmanuscripts.com.