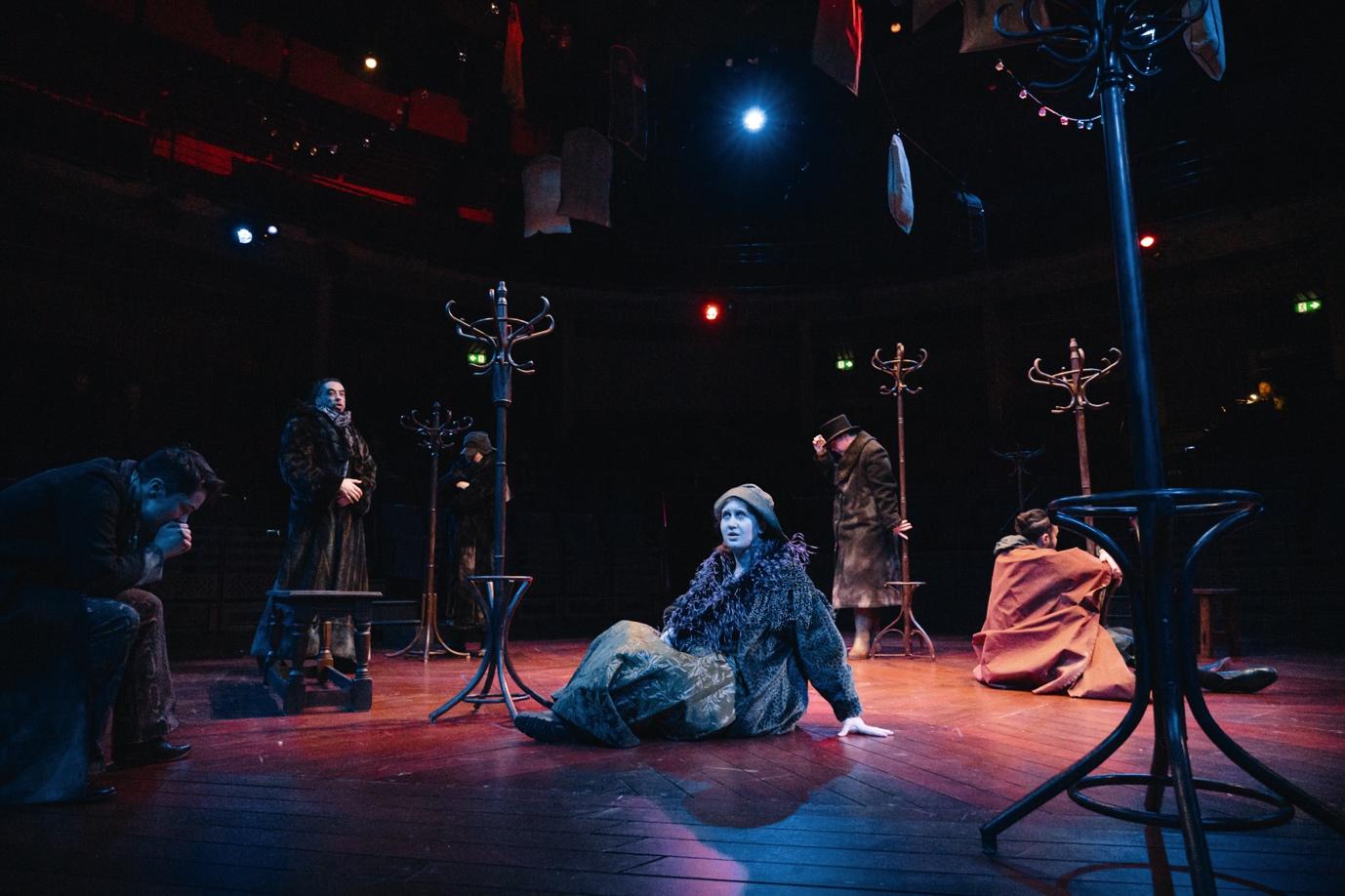 Jayoon Byeon (Lancaster University) reviews As You Like It (Dir. Laurie Samson for Northern Broadsides) at the Dukes Theatre Lancaster, 3 March 2022

Welcome to the Forest of Arden, where garments are afloat in the air and coat hangers stand tall as trees. There is a striking emphasis on garments in the Northern Broadsides’ production of As You Like It; actors enter and exit the stage through a coat rack, highlighting how gender and class identities are fluid, like trying on clothes.

Northern Broadsides expand the gender-bending aspects of the text through inclusive casting, minor yet memorable amendments to the script, and a capacious wardrobe of diverse costumes. Rosalind is portrayed by a non-binary actor EM Williams; both the character and the actor go by the pronoun ‘they’ instead of ‘she,’ thus evading a binary, heteronormative narrative. Joe Morrow shines as the glittery Touchstone in drag, going beyond the boundaries of the script both verbally and sartorially. With vibrant adlibs designed to engage the audience, he boldly goes against Hamlet’s advice for players to ‘speak no more than is set down for them.’ The contrasts between oppressive court are emphasized by Ali Gademan’s skilful doubling of Duke Frederick and Duke Senior. Another notable character in this production is Ada, a maternal substitute for Adam in Shakespeare’s text. While Adam enigmatically disappears in the original text, the Northern Broadsides’ production gives Ada a proper exit from the stage world. With a coat, Duke Senior tenderly covers her aged body and finally her face, and Jacques (Adam Kishmiry) crosses himself and prays for her. By marking the death of this nurturing figure, the value of caring service that she embodies is ritually acknowledged and revived in Duke Senior’s court. The Forest of Arden opens up a space where characters can oscillate between female and male, homoerotic and heteronormative relationships. The production especially highlights Rosalind and Celia’s relationship: they are physically intimate in the court scene, sharing touches, hugs, and kisses on cheeks and hands. With Rosalind in exaggeratedly feminine attire and Isobel Coward’s Celia in a traditionally masculine suit (see picture), the cousins’ relationship visually mimics heteronormativity. There is a slight pause after Celia tells Duke Frederik (Ali Gademar) that she and Rosalind have ‘slept together,’ which subtly connotes a frisson among the triad on stage and the audience. The cousins reverse gender positions to go out into the Forest of Arden, but for Celia, their journey to freedom perpetuates their time as a couple, regardless of the gender position each takes.

When Rosalind (disguised as Ganymede) and Orlando (Shaban Dar) enact a marriage ceremony and later kiss, their excitement, centre stage, draws the eyes of spectators. This is contrasted by Celia’s evident distress throughout. She wipes tears, whimpers, and complains to Rosalind, raising the tension between the two once again. Another notable element is the dramatisation of the hunting sequence as Celia’s dream, in which her nightmare of being parted from Rosalind is visualised as an aggressive intrusion of men. The production proceeds according to the original plot, but leaves the audience wondering where the play might have gone had Rosalind and Celia’s relationship not been interrupted. While providing the audience with food for thought about gender, sexuality, and identity, the overall tone of the production is energetic and lighthearted. The audience shares in the pleasure of a world where ‘there’s no clock in the forest,’ and a final maypole dance where diverse colours, genders, and sexualities are intertwined.