The following is a guest post by Richard and Mary Coaten, whose BSA-sponsored production of As You Like it will be taking place in Stratford-upon-Avon this summer.
For further details, contact marycoaten@hotmail.co.uk or visit their Facebook page.

In February this year 20 members of the company went to Bucharest, and together with several local families in a variety of different languages, created a very shortened version of Romeo and Juliet in ‘Magazinul Cocor’ – a city centre shopping centre.  It was so revealing to us all about how cross-culturally playing with the text, the imagery, the meaning and the movement, brings out completely different and unexpected results. These give us new insights into how, through improvisatory theatre-games and movement exercises, we can engage children and adults completely new to the stories and to the making of theatre in non-traditional ways in non-traditional venues. This had us hooked, we wanted more of this, and applied to and were given funds by the British Shakespeare Association, to help us bring over our new fledgling King’s Troupe Company in Romania to perform with us at the Dell in August this year (see below for more details).

Five of the company went again to Romania to meet and rehearse with five members of the new Romanian branch. We were all hosted by the Gaitanaru family, and this great hospitality will be returned when they come in August to perform with us at the Dell, staying in Stratford and then travelling north to stay with us in West Yorkshire, performing again in our home town of Hebden Bridge the following week.

What a time we had, which included a day-trip courtesy of our hosts to the Carpathian Mountains north of the city, where we did some rehearsing in an old royal castle at Peles. The ‘seven ages of man’ speech by Jacques was fun to have explored in the gardens of the castle, surrounded by a great and ancient forest; teeming with wildlife including bears and wolves, which could indeed have been the Forest of Arden as it was in the 16th century! We were also very fortunate for our trip to coincide with the Romanian National Theatre’s production of Furtuna (The Tempest), directed by the renowned Bulgarian Director Alexander Morfov. It was wonderful for us, and the young people in our group, to see such an imaginative production, full of physicality, humour, music and magic, all in Romanian of course! 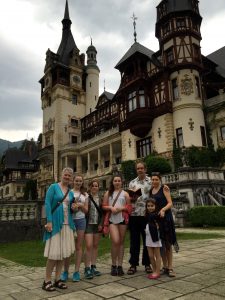 As part of our commitment to doing things differently we have been putting into practice what we have learnt from our partnership with the Royal Shakespeare Company, who have given us confidence over the years to explore, to take risks and do our theatre-making more full of movement, vibrancy and play than ever before. We have been inspired by the RSC’s work in China and Greg Doran’s description of it in the recent 2016 BBC Richard Dimbleby Lecture he gave on the subject.

Over the last several months, a number of refugees from Iran and Afghanistan have expressed interest in taking part, together with the kind support and encouragement of our local refugee centre. We have since April had three meetings up at the farm, where one of our company live, about a five-mile drive from the centre of Halifax. We have got to know each other through shared game playing, food, song, music and dance. Gradually, interest has grown and we now have a small core of people joining us in theatre-making, as we explore Shakespeare’s text and songs in Farsi and Romanian. The following words, spoken by one of our members from Iran, playing Duke senior, are all the more poignant given the circumstances our new members find themselves in, and testimony to the universality of the theme of exile and reconciliation in Shakespeare’s work.

Now, my co-mates and brothers in exile
Hath not old custom made this life more sweet
Than that of painted pomp? Are not these woods
More free from peril than the envious court?
As you Like It, Act 2, Scene 1. 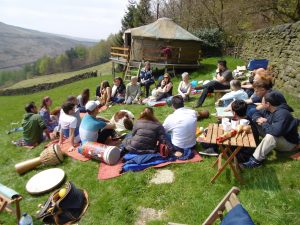 The King’s Troupe return for their 5th time to the Dell and in this 400th anniversary year will bring an extra-ordinary performance of As You Like It.  We have helped establish a new Romanian inter-generational theatre group based in Bucharest, and they will be joining us, together with actors from our local centre for refugees here in Halifax. Our theme for the production is ‘Shakespeare without Borders’, where the Forest of Arden will become a vibrant mix of cultures and languages including Romanian, Iranian, Kurdish, Syrian and African.  Charles the wrestler will have his own circus company, and the London Taiko drum-school will again be with us. It promises to be a very special extravaganza, and for the first time this year we are delighted to have the support of the British Shakespeare Association, who have enabled the Romanians to join us. 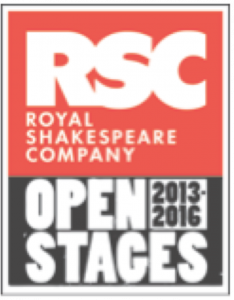 Founded in 2010 and based in Hebden Bridge, West Yorkshire, we specialise in the performance of Shakespeare. Our work is open to all and we are an amateur inter-generational company. Of 30 current members our youngest member is 2 years old and the youngest at heart is 65+. We have no audition process as all are welcome. We do not charge people to attend and we have to date self-funded all our projects. We work together collaboratively to make each piece and for the past four years have been mentored by the Royal Shakespeare Company as part of the ‘Open Stages’ project. We are passionate about theatre-making and as part of our development of Troilus and Cressida in 2014 we went to Athens and Istanbul to research Trojan and Greek mythology, including a visit to the Troy exhibition at the archaeological museum in Istanbul. This resulted in a production that was a site-specific theatrical festival that lasted a weekend involving camps of Trojan and Greek warriors. BBC Radio Leeds did an outside broadcast from the festival and representatives of the RSC came to watch in the evening. This together with our other productions and theatre training from the RSC has enabled us to grow and our ambitions have increased, especially since visiting Bucharest this year.

Above all, our work is about widening participation, theatre-making in non-traditional ways in non-traditional venues nationally and internationally, through the wonderful medium of Shakespeare and his works. Last year, we managed to reach the second and final stage of the audition process for the RSC’s Dream 16 Project, but were pipped at the post by Leeds Arts Centre.