In November, I had the pleasure of participating in several British Council Korea events to round out the year-long Shakespeare Lives project, marking the 400th anniversary of Shakespeare’s death.

This involved chairing the Sonnet Exchange on 24th November at the Blue Square arts venue. One of several such events facilitated globally by the British Council in 2016, my responsibility was to gain some lively insights from the poets, Bosun Shim and Ben Wilkinson, and artists, Sung Goo Won and Mark Stafford, and into their choice of two sonnets and the processes involved in collaboratively reimagining them across two different cultural and linguistic contexts and several hundred miles. Bosun had been paired with Mark, working on sonnet 145 ‘Those lips that Love’s own hand did make’ to respond to the poem’s problematisation of hatred (even affected, even momentary, even joking – the sonnet seems to include an autobiographical pun using the name of Shakespeare’s wife Hathaway) in light of divisive political situations affecting the UK and US in 2016, Brexit and the American presidential elections. Once deemed a pretty piece of Shakespeare’s juvenilia by critics, this creative team uncovered a dystopian vision of relationships – romantic and national. In doing so, they neatly inverted the tradition of sonnets that Shakespeare would have been familiar to Shakespeare as a young man being to praise great men, to question a politics (sexual or political) of hate. Sung Goo and Ben opted for sonnet 113, ’Since I left you, mine eye is in my mind’, part of the sonnet cycle addressed to a beloved young man and exploring themes of love, absence, and the effect of these on sensory perception. This second creative combination preserved and further foregrounded the sonnet’s toying with the word ‘true’ as meaning both devoted and real, both faithful and actual. Their re-visioning of the sonnet verbally and visually foregrounds the way in which a loved one’s physical absence is belied by the mind’s eye’s seeming determination to discover that person in all surroundings, complicating binaries such as with and without, before and after. In this way, both retellings of the sonnets achieved the British Council’s aim to go beyond merely illustrated rewritings and to emphasise the narrative elements found within the individual sonnets and spanning multiple works within the 154 Shakespeare sonnets first printed in 1609. Asking this quartet to put into speech the intangible workings of their readings and re-makings seemed an even more daunting prospect to them than the task of taking Shakespeare’s words and putting them into their own tongues and pen strokes. However, one aspect of their endeavors that made a strong impression of me was the range of their previous experiences with Shakespeare – from having studied him at school to only getting acquainted with his writing (even if his reputation preceded him) this year. To me, looking from the outside of the process in, the Korean Sonnet Exchange experience spoke of it never being too late to meet Shakespeare and there being no one, right way to get to know him. This is particularly so because we can take advantage of a never-ending, not-yet-staling dialogue between Shakespeare’s works and worlds and our own.

Like the sonnets chosen for the exchange, hate, love and separation were at the forefront of another favourite experience I had during the week. The internationally-renowned Korean theatre company Yohangza gave me the singular privilege of observing the rehearsals for their upcoming production of Romeo and Juliet. I am writing this post from the Royal Shakespeare Company’s The Other Place foyer in Stratford-upon-Avon, a town where I’ve lived for almost a decade (happily this important anniversary for me and Shakespeare is coming up in 2017, to fill the void left by the 400th celebrations). Apart from a trip to the staff canteen to sample the delicious food that fuels the casts and crews of this national theatre, this is as close as I get to the everyday life and creative process as staff meet up and the occasional rack of costumes rolls across the floor. I have been mesmerised by seeing the actors of the Vietnamese National Theatre in Hanoi rehearsing – but a local text, not Shakespeare, so there was minimal chance of admitting me into the rehearsal room resulting in any interference. Yohangza were singularly generous and relaxed in welcoming me into their busy day: introductions abounded, as did cups of deliciously warming ginseng tea, an organic apple deftly peeled by Juliet’s Nurse (which had me wondering whether the actor was always this solicitous and motherly, or was a practitioner of Stainslavsky’s method acting) and the sort of sugary snacks I remembered being a staple of student Shakespeare productions during my PhD studies. I was made to feel further at home by my inclusion into a raffle prize-draw to keep motivation and company bonding high and by being slipped into a cast and crew hoodie, with the play’s title emblazoned on its back. I relish the independence and solitude I can fashion for myself several times a week as an academic, but I did feel a pang of jealousy at Yohangza’s enviable communal and collaborative workplace spirit – even if I was told by the producer that actors work the kind of all-absorbing, long hours familiar to many academics. The whole team sat around a wide, u-shaped bank of desks, some actors just-audibly memorising lines from their scripts, while scenes played out in the playing space after a warm-up game of keepie-uppie with a paper cup (I was assured this game is rife on Korean university campuses around exam time too) and actors patting down their muscles to get the circulation going. These were not just any scenes, but some of the most famous scenes in theatre history and literature ever written in English (and here translated into Korean): the prologue that dooms these most famous lovers as star-crossed, here delivered by the actor playing the nurse – a welcome change from the male, monastic-looking choruses of my childhood theatre-going; the ball where Romeo and Juliet meet, cleverly lit here by a single candle which obscured the other characters and threw the focus solely onto the smitten teenagers; the balcony scene, where the actors, at first coy, presented a refreshingly childish, unmannered intimacy, sometimes crouching on all fours to converse; the fight where Mercutio is fatally wounded. Even though there were still three weeks to go until curtains up, the production had nailed the sense of violence simmering beneath a wafer-thin surface calm in Verona: weapons were always ready to hand and their wielders quick to use them, across the generations, from young boys to stately fathers. I loved watching the care and ingenuity with which actors approximated the experience they will have on stage – jumping and stepping on the spot to replicate the traversing of levels and timings they will perform on stage and simulating an elaborate parasol with an ordinary umbrella, polystyrene tray and scarf. My only regret from the day was that I will not be able to catch this cast, famed across stage and screen in Korea, playing out the full production in Seoul this December.

I can’t end without a few words of reflection and comparison on the aspect of Shakespearean theatre companies that I know best:…meals. The Royal Shakespeare Company canteen is known for its menus celebrating various national cuisines. I’ve had perfect, Polish-inspired pierogi (boiled or fried dumplings). Can I suggest that the kitchen in Shakespeare’s hometown takes inspiration from Blue Square for some Seoul food? Lunch was a crystal clear soup with fishcake (‘eomuk’), lip-smacking sticky rice with seasonal mushrooms, with probiotic yoghurt, fried egg, and – of course – kimchi on the side. This arts centre, its practitioners and the Shakespeare they were performing testified to the fact that a nutritious, balanced diet, unlike the unhealthy obsession of Twelfth Night’s Andrew Aguecheek with eating an excessive quantity of beef, does no harm to wit. 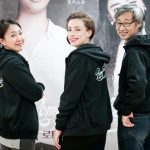