Working in partnership with Birmingham City Council, Professor Ewan Fernie has won a grant from the Heritage Lottery Fund to develop a big project which would revive  (1) Birmingham’s world-significant Shakespeare collection and (2) the ‘trailblazing’ spirit of its original foundation. 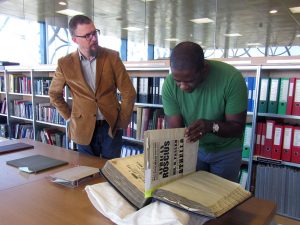 Professor Ewan Fernie and Adrian Lester at Library of Birmingham, studying a nineteenth-century playbill from the Birmingham Shakespeare Memorial Library which advertises a Birmingham performance of Othello with Ira Aldridge in the title role.

The Birmingham Shakespeare Memorial Library was opened in 1868 as the first great Shakespeare library in the world; it remains the only internationally important Shakespeare collection owned by a public library.  It holds around 100,000 items, ranging from the only First Folio bought for comprehensive (including working-class) education; to Shakespeare-related art-work by Dalí, Cocteau and Kokoschka; through materials in 93 languages from Abkhazian to Zulu, including a late-nineteenth-century edition in Braille.  This splendid treasure-trove belongs to all the citizens of Birmingham.  It is part of a great effort of the Library’s founder, George Dawson, to establish a ‘cultural commonwealth’ in the city where great culture would be enjoyed and, indeed, actively recreated by all.

‘Everything to Everybody’ will seek to share these riches across the diverse communities of today’s city.  It seeks to recapture a forgotten association between Birmingham and the Bard.  And it will work to renew in time for the 2022 Commonwealth Games a proud heritage which for a time made Birmingham the most ambitious and forward-looking city in the world.

University of Birmingham Vice-Chancellor Professor Sir David Eastwood said: “We are delighted to lead this landmark project since opening up the Birmingham Shakespeare Memorial Library will make a real contribution to world culture. George Dawson was a pioneering figure, an inspiration for our founder Joseph Chamberlain in establishing the University of Birmingham as England’s first civic university in 1900.”

Birmingham City Council leader Cllr Ian Ward commented: “Thanks to this great opportunity from the Heritage Lottery Fund, we’re developing an extensive programme of community-led activities which will help people of all ages and backgrounds rediscover Birmingham’s Shakespeare Library and reinvent it for the future.”

The Project’s Patron, Birmingham-born, renowned classical actor Adrian Lester OBE, Honorary Fellow of the BSA, remarked: “Everything to Everybody is a great rallying cry for a more democratic culture and for Birmingham as the forgotten trailblazer of that important and inspiring dream.”