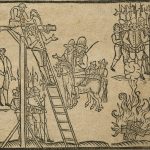 Eric Dunnum: Unruly Audiences and the Theater of Control in Early Modern London

Eric Dunnum, Associate Professor at Campbell University, tells us about his first monograph, published by Routledge in 2020.

The kernel of my monograph, Unruly Audiences and the Theater of Control in Early Modern London, was formed way back in Dr Amelia Zurcher’s class at Marquette University on early modern drama in 2008. We read Richard II in conjunction with Tamburlaine, and I was struck by the similar (but contrasting) way Richard and Tamburlaine handled audiences. Richard refused to hand over the crown in front of an audience and Tamburlaine refused to take the crown from Mycetes until he had an audience. They both understood the power of performance and the need for an audience. I had a hunch that these texts weren’t just interested in statecraft or political power, but were also meditating on the efficacy and nature of stage performance.

From there, I became interested in what early modern playwrights thought about performance and audiences. At the time, I was surprised to learn that there was no sustained treatise on acting, performance, or dramaturgy written by an early modern playwright, except perhaps Thomas Heywood’s Apology for Actors (1612). I began to wonder what it would look like if there was one. My dissertation tried to use clues from metadramatic scenes and inset performances to understand how playwrights thought through their own performances.

I began by tracking down as many metadramatic scenes as I could, and what I found was odd: playwrights, it seemed, were not particularly confident in the effective power of their own plays. For instance, when playwrights staged plays, the performance didn’t actually work. That is, when a fictive performance is given a specific purpose, that purpose is almost never achieved. This may seem surprising since the most famous example of an inset performance actually does work. In Hamlet, an inset performance is used to “catch the conscience of the king,” and it works. However, the success of “The Mousetrap” obscures dozens of other examples throughout the sixteenth and seventeenth century where inset performances fail. A clear example is found in Philip Massinger’s The Roman Actor (1628)a play is produced to teach a miser a lesson about the dangers of greed. However, the plan doesn’t work, and the miser remains as greedy as ever. A similar scheme fails in Massinger’s The City Madam (1632). But it isn’t just Massinger. James Shirley’s The Bird in a Cage (1633). George Chapman’s The Gentlemen Usher (1605), John Marston’s Histrio-Mastix (c.1598-1599), Thomas Middleton’s Hengist, King of Kent (c.1615), among others, feature an inset performance that fails to achieve its goal. In fact, the only fictive play besides Hamlet that scripts a successful performance is Richard Brome’s A Jovial Crew (1641).

Why were playwrights seemingly so hesitant to stage plays that changed their audience’s behaviour? My first attempt at an answer was to theorize that these plays were in dialogue with anti-theatrical writers. Writers such as Anthony Munday, Stephen Gosson and John Northbrooke argued that plays had a direct (and negative) effect on the actions of the audience. Playwrights within their plays were attempting to counter that message with one of their own – plays don’t affect the audience at all. They were essentially saying, “plays can’t hurt you, so don’t worry about it and come enjoy some live performances at Bankside.”

And yet there was more, I think, going on. After all, beyond some negative PR, anti-theatrical writers didn’t pose a huge threat to the playwrights. They were mostly active in the 1580s and 90s, and probably didn’t have a massive influence or readership. So I doubt playwrights would put this much work into countering a fairly fringe discourse. The effort they put into countering this message suggests a deeper anxiety.

And they were right to be anxious. The basic premise of the anti-theatrical writers (that performance influences the actions of the audience) was repeated by those with much more power over the theatres. London authorities used this same argument when they closed the theatres.

Early in my research I became fascinated by the 1597 riot at the Swan theatre, seemingly caused by a performance of the Isle of Dogs. Warrants were issued for the authors, and all the theatres in London were slated for destruction. The order to close the theatres used similar logic (and language) as the anti-theatrical writers: the play affected the audience’s actions and so the play, playwrights and playhouse were at fault. Although the riot at the Swan was the only documented disturbance that occurred within a playhouse, plenty of riots happened in the vicinity of the theatres, including the almost yearly apprentice riots. These too resulted in closings, and the orders of closure again used language that mirrored the anti-theatrical writers. The evidence suggested to me that the existence of the theatres and early modern drama itself was contingent on the behavior of audiences.

Much of the research I did while expanding my dissertation into a book centred on these riots. I read documentation on and responses to the unruly activities of Londoners. My research, aided by some of the fantastic work on riots and unrest by historians like Roger Manning, Tim Harris, Ian W. Archer, and Taylor Aucoin, as well as early modern scholars Ian Munro, Paul Menzer, and Chris Fitter painted a picture of a very unstable London and some very fearful London authorities, who were willing to shut down the theatres whenever the social order was threatened. This put the playhouses in an extremely precarious position: in order to stay open and continue to produce plays and make money, they had to find a way of controlling their unruly audiences.

The similarity between anti-theatrical arguments and the logic of theatre closures provided the key, I think, for understanding why playwrights were so hesitant to embrace the efficacy and power of their own performances. They wanted to construct a theory of performance that controlled their audiences’ physical responses in the theatre. To oversimplify, they were trying to teach their audience to not respond to performances, thereby training them to watch a performance in a polite and nonthreatening way.

The failure of inset performances to affect their audience in plays like The Roman Actor is just one strategy that I explore in my book. I find that plays throughout the period use a variety of methods to control their audiences because they feared what might happen if their unruly audiences were inflamed in the playhouse and let loose in London.

As an American, it is interesting to look back on my research on riots after the unrest in the summer of 2020. In early modern London, capital (the playhouses) collaborated, perhaps unwillingly, with the state to ensure social order. The plays may have been exploring or even endorsing radical and subversive ideas, but the institution of the playhouse was fundamentally conservative. Its first and most important job was to stay open and make money. It is a reminder, I think, that no matter how progressive a stance an institution might take, capital will always work with the state to protect itself. This might help explain why a mass movement against police brutality, which was nominally endorsed by institutions and companies throughout the world, resulted in more brutality and increased police budgets.

Part of the value, then, of studying Shakespearean era drama and its relationship to early modern London is being able to trace how modern systems of power emerge. When we read Shakespeare and his contemporaries, we are watching as they negotiate new institutions that they are partially inventing. While my work is specifically focused on trying to understand how playwrights were working to construct the new institution of playgoing, to understand this institution, we also have to learn how broader systems of state and financial power operated, systems that are still with us today.

To learn more about Eric’s research and publications please visit his departmental page.

Image credit: Detail from title page of A students lamentation that hath sometime been in London an apprentice, for the rebellious tumults lately in the citie hapning (London, [1595]), Folger Shakespeare Library, STC 23401.5. Reproduced under Creative Commons Attribution-ShareAlike 4.0 International License.