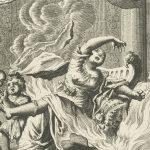 For the last few years, my work has centred around listening. My DPhil thesis and soon-to-be monograph (Sound Effects: Hearing the Early Modern Stage, Manchester University Press), mapped the sonic world of the early modern stage, from bangs and crashes to echoes and silences. Now, as I start a new project at Newcastle University, as a Leverhulme Early Career Fellow, I am listening to a new kind of sound: female sounds of distress.

My work on material sounds, made by machines and instruments – drums, trumpets, guns and cannons, fireworks – has now turned towards the voice itself. For example, in a short Element I have forthcoming with Cambridge University Press, Shakespeare’s Visionary Women, I listen to Calpurnia’s failed pleas, Cassandra’s shrieking prophecies, and the screams that mark the off-stage death of Lady Macbeth. For my new Leverhulme project, I’m now looking at female voices in poetry and in prose, examining moments at which women speak out or are silenced.

Female sounds of distress are, as I am finding in this early stage of research, difficult to hear. I mean this not only in a practical sense, although cries, shrieks, and moans are not always easily found in the archives, but in a personal sense too. In female complaint poems, in pamphlets which express the horrors and loss of war, or in accounts of maternity and miscarriage, the voices I am encountering sound almost uncomfortably close.

For instance, one pamphlet tracing female suffering that is particularly ‘noisy’ is the 1688 A Cabinet of Grief: Or, The French Midwife’s Miserable Moan for the Barbarous Murther Committed Upon the Body of her Husband. A woodcut on the title page shows a woman, open mouthed, engulfed by flame – her scream is suggested, but never realised (to see the woodcut, please visit: https://omeka.cloud.unimelb.edu.au/execution-ballads/items/show/951).

The midwife of the title (Mary Hobry) is then ventriloquized twice over in the course of the pamphlet. First, the record of her crime and execution begins as a prose account, written as if from a first-person perspective: ‘This being done, I concluded all was safe and well, but the Carcas was soon found’ (6). The words attributed to Hobry are confessional and penitent. She is ‘truly humbled under a sense of unfeigned sorrow’ (7).

Then, when her ‘own’ account of the crime is concluded, Hobry’s confession is given again, in the form of a ballad which is to be sung aloud by the reader. Explicit instructions are given:

For the better impressing of this Subject on your Hearts and Minds, take these following Lines, which may be Sung to the Tune of, The Pious Christians Exhortation.

This is not a simple condemnation of an apparently violent woman (who was held under great suspicion on account of her gender, her French nationality, and her Catholic faith). Reader/singers are encouraged to sing Hobry’s suffering aloud, performing the role of Hobry herself: ‘Alack! My very heart does bleed,/To see my woeful Destiny’ (8). To sing the ballad is to align oneself with Hobry both in her crime and in her cries. Those encountering this pamphlet vocalise the evidence Hobry herself gave and, briefly, speak as the French midwife.

Beyond these two kinds of ventriloquism, the pamphlet is interested in wordless suffering through sound. The prose account of Hobry’s crime, offered before the ballad, captures a terrible moment of sonic despair. When Hobry is first arrested, she is a sound-maker, reaching out in vocal panic. She describes being ‘Hurry’d to Prison, where I bitterly bewail’d my unhappy state’ (6). Yet when Hobry is sentenced, sound becomes not a protest but a punishment: her external wailing twists inwards, penetrating her body.

And so I receiv’d the due Sentence, To be burnt till I was dead, which was the most terrible and astonishing sound in my Ears, that ever I heard in my Life (7).

With these lines, her account ends abruptly. It is as if, with the word ‘dead’, all capacity to hear or engage sensorily with the world stops at once. Not a single word follows her sentence. Death is represented as silence, like the silent scream in the image on the pamphlet’s title page.

Searching for distress can make for some bleak reading, but I can’t wait to get started. Should you come across any early modern screams yourself, do send them my way (@laurajay_wright). I’ll be listening out for them.