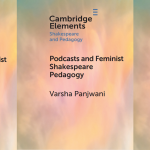 Dr Varsha Panjwani is the host of the Women & Shakespeare podcast and the author of Podcasts & Feminist Shakespeare Pedagogy (Cambridge University Press, 2022). In this blog post, Dr Panjwani shares with us  an edited excerpt from her book, which is now available to pre-order from the publisher’s site.

Dr Panjwani’s book is available to download for free until 11th November 2022.

On 8 October 2020, this video clip was shared widely online; in cyber parlance, the clip ‘went viral’:

Perhaps this clip, in which Kamala Harris repeatedly pointed out the obvious: ‘Mr Vice President, I’m speaking, I’m speaking’, resonated with so many women generally and with women of colour specifically because they heard echoes of their own experiences in Harris’ vocalisation and Mike Pence’s attempt at dismissing her speech. Unfortunately, this moment has a robust history; in ‘The Public Voice of Women’, Mary Beard takes a long view of the ‘culturally awkward relationship between the voice of women and the public sphere’ in the West. She quotes from one of the foundational cultural texts, The Odyssey, in which Telemachus, the son of Odysseus and Penelope, declares to his mother that ‘speech will be the business of men, all men’. Significantly, Beard elaborates that the word Telemachus uses for speech is ‘muthos’, which ‘signals authoritative public speech (not the kind of chatting, prattling or gossip that anyone – women included, or specially women – could do)’ and, according to him, muthos will be the exclusive purview of men.

Early twentieth-century broadcasting trends also reveal such vocal prejudice. For instance, as Anne McKay recounts, the British Broadcasting Corporation (BBC) hired their first woman announcer, Giles Borrett, only in 1933 and terminated her contract after a mere three months despite her garnering praise for her performance because listeners objected to a woman’s voice in an announcer’s role. The story was similar in the US where the National Broadcasting Company (NBC) appointed Elsie Janis as their first woman announcer in 1935 and ‘listeners complained that a woman’s voice was inappropriate’, so her employer announced that she would ‘read no more Press-Radio news bulletins’.

More generally, as summarized by Christine Mottram, numerous twenty-first-century studies also indicate that masculine voice qualities such as lower pitch, deeper oral and chest resonance, downward inflection at the end of the thought, clear tone achieved by breath support are perceived as having more authority. Although these vocal features can be found in women’s voices, men are physiologically more likely to possess them, so ‘it is still the case that when listeners hear a female voice, they don’t hear a voice that connotes authority’, as Beard puts it. This sonic marginalization is not only gendered but also racial. Building on the work of Jennifer Stoever and W.E.B. DuBois, David Sterling Brown explains ‘that ‘race gets in the way’ of registering Black voices or voices of people of colour as authoritative because the dominant White listening practices set the tone for who is perceived as worth hearing and paying attention to. It is, therefore, no surprise that women of colour are the most overlooked public speakers. Shakespeare Studies reflects this pattern.

The British Academy’s Shakespeare Lectures is an annual lecture series and, since its inauguration in 1911, speakers have covered a range of subjects. However, even if we only count since the beginning of the twenty-first century until the most recent lecture (2000–18), the gender distribution is 13 men and 3 women. A similar gender (im)balance is noticeable in the speakers at The Notre Dame London Shakespeare Lectures in honour of Professor Sir Stanley Wells. An annual lecture takes place as a part of this series at the London Global Gateway of the university and it has a pedagogic focus: ‘envisioned as a celebration of a scholar of world renown, it is also a venue for students on the London program to meet leading academics and theatre practitioners who shape their fields’. Since its inception in 2012 to 2022, the series, which has ‘developed in close collaboration with the Shakespeare Birthplace Trust in Stratford-upon-Avon and the Shakespeare Institute (University of Birmingham)’, has featured 7 men and 4 women. Again, no Black or Brown woman has been a speaker here. The Kingston Shakespeare Seminar (KiSS), which promises to bring ‘leading international Shakespeare scholars’ to the Rose Theatre, Kingston-upon-Thames, hosts several lecture series, conferences, and colloquia. Among these, the variously named Rose Shakespeare Lecture/ Shakespeare Birthday Lecture is an annual event that has exclusively featured men since 2014. Only 1 woman – a woman of colour – has given a lecture in this series in 2013. KiSS also runs a public lecture series on a more regular basis. Not counting the few lectures that are shared between participants, it has included 35 men and 11 women. The data for 2017 is particularly disheartening, with 8 public lectures by men and none by women.

The data presented here is patchy and reflects the partial nature of such records in the public domain. So, I do not wish to give the impression that there have never been conferences that have disrupted this trend. The 2019 BSA conference is a case in point as all plenary speakers at this event were women of colour. However, the very fact that I have been able to collect multiple instances in which major conferences and lecture series have marginalized women in the twenty-first century itself speaks to the gender disparity in the public voice of Shakespeare scholarship. As Wendy Lennon pointed out to me in a personal interview, since conferences can be seen as ‘pockets and examples of higher education’ or ‘a microcosm of the bigger problem’, these examples typify the (sometimes unconscious) systemic bias against women’s public voices in Shakespeare Studies.

In my minigraph, Podcasts and Feminist Shakespeare Pedagogy, I argue that, due to their emphasis on public voice, podcasts can (and are) participating in tacking this gendered aural marginalization at Shakespeare conferences and public lectures. In other words, podcasts are protests and amplify women’s voices in the field because many Shakespeare podcasts are hosted by women (see below for a list). This is not to say that podcasts have solved the issue of women not being handed the mic in our field. Rather, podcasts have the potential to change the aural landscape of Shakespeare Studies because they are creating spaces that do not currently exist in the offline world. However, the existence of podcasts should not preclude a call for fairness in the conference circuit. On her blog, Jacqueline Wernimont produced a crowdsourced list of women ‘who can be invited as featured or plenary speakers’ when she saw a similar gendered marginalization in the Digital Humanities (DH) conferences and declared that ‘going forward, all-male panels can only be construed as a choice, not an issue of ignorance. We have been busy building communities we want to see in DH, and now we’ve taken the time from our own research, our teaching, our lives to pull together information for you – now it’s your turn to do your part’. Similarly, these podcasts are audio lists of potential conference speakers but they are also more than that. Together, they constitute a virtual space which models the kind of soundscape that our students want and need in Shakespeare Studies. Now it is your turn to do your part so tune in, listen, and hand over the mic.

Here are some inclusive Shakespeare podcasts hosted by women:

Explores Shakespeare in ‘global culture, from theater, music, and films to new scholarship, education, amazing discoveries, and more’. In their own words, it is ‘a “no limits” tour of the connections between Shakespeare, his works, and our world’. Every episode features guests and, after a short introduction by Michael Witmore, they are interviewed either by Barbara Bogaev or Neva Grant or Rebecca Sheir. The podcast creators have also invited a number of women scholars to address not only women-centred Shakespeare subjects but also textual, performance, editorial, architectural, social, cultural, and culinary history of Shakespeare.

Closely tied to the work of this institution and takes listeners ‘behind the scenes, into rehearsal rooms and onto [their] stages’ with an avowed commitment to looking at ‘Shakespeare’s transformative impact on the world around us, asking questions about programming, gender, race, social justice and their relationship to Shakespeare’. It takes the form of discussions and interviews and is hosted by Michelle Terry, Farah Karim-Cooper and Imogen Greenberg.

It was created to investigate ‘how Shakespeare is used to amplify the voices of women today and how women are redefining the world’s most famous writer’. It is structured as conversations exclusively with diverse women creatives and academics. Hosted by Varsha Panjwani.

For learners looking for ‘variety of different ways we might understand Shakespeare, the kinds of evidence that might be used to strengthen our critical analysis, and, above all, the enjoyable and unavoidable fact that Shakespeare’s plays tend to generate our questions rather than answer them’, Emma Smith ran this highly successful podcast series in the form of lectures which she recorded in her classroom.

An ‘an irreverent mix of entertainment and scholarly content’ and discusses ‘the plays of William Shakespeare and his contemporaries, as well as other fascinating aspects of the Early Modern period’s lively theatre and print culture’ and takes the form of conversations between Jess Hamlet and Aubrey Whitlock with additional guests for some episodes.

Explores Shakespeare in the rehearsal room and the classroom in an Australian context and is hosted by actor and drama teacher, Amy Perry.

Focuses on ‘the history of the man’ and interviews ‘the history experts who know Shakespeare best’. Hosted by Cassidy Cash.

Dedicates six episodes to each Shakespeare play and is hosted by Heidi White, Sarah-Jane Bentley, and Tim McIntosh.

Declares that it ‘takes neither itself nor Shakespeare seriously’ and is hosted by the couple Nora Williams and James Platt and, in a tongue-in-cheek rebuke to patriarchal descriptions, bills Nora as the ‘theatre nerd/Shax expert’ and James as ‘husband/theatre sceptic’.

A podcast that proves play-by-play that every Shakespeare play is gay. Hosted by Emma and Hailey.

Dr Panjwani’s book is available to download for free from the publisher until 11th November 2022.