Teaching Shakespeare continues to strive for internationalisation. We’ve heard from educators and students of Shakespeare in America, Australia, Brazil, Canada, France, Germany, Israel, Japan, Korea, New Zealand, Norway and the UK but there are so many countries about whose Shakespeare we have yet to learn. In September 2016, I’ll be keeping the momentum going with a trip to Vietnam thanks to British Academy funding. 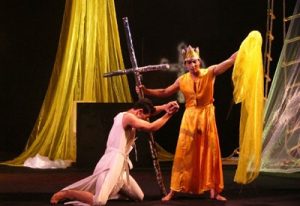 Firstly, I’m hoping to find new contributors for Teaching Shakespeare. Vietnam is a country from which we haven’t yet heard. Contributors might want to write articles but they could also feature in interview with me or as part of a vox pop or as the focus of an article. I’m looking for folks to talk to about Shakespeare in Vietnamese education: school, university, extramural, lifelong…whatever. It’s just as useful for me to find out that people haven’t encountered Shakespeare, so I’m really interested in talking to anybody who has learnt (and/or taught) English in Vietnam – a non-exclusive list includes university students, school and university teachers, Vietnamese and non-Vietnamese nationals. I also want to offer opportunities for celebration, reflection and improvements on practice to teachers of Vietnamese students (and Vietnamese students of Shakespeare) at Western universities. In short, I’m looking for contacts in, or from, Vietnam and am happy for you to distribute my details to them if it’s not appropriate to pass on theirs (sarah.olive@york.ac.uk).

So, in this 400th anniversary year and Binh Than (year of the fire monkey) that both promise to reward inquisitiveness and curiosity, I look forward to hearing from you about Vietnamese Shakespeare!