The King’s Troupe at the Dell

The King’s Troupe at the Dell (August 7th 2016) – contributing to the RSC’s summer outdoor programme with an internationally flavoured performance of ‘As You Like It’ in Farsi, Romanian and English on the 2016 International Day of Friendship!

“The King’s Troupe arts and drama programme has been running for the past few months, and has provided a group of our Centre Users with a fantastic and rare opportunity to join together with a creative group who stand in solidarity with their struggles, make friends and build support networks outside of their communities, foster a strong group dynamic based on commonality and most importantly have an outlet for creative expression”. 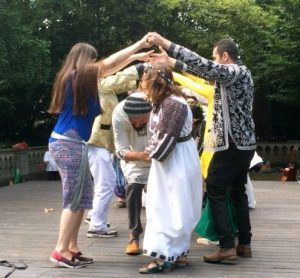 This is the last of our three blogs concerning our Dell performances and the musical, theatrical, multi-cultural and improvisatory exploration that has led up to them, beginning with our first meetings up at Swan Bank Centre in Cragg Vale beginning on the 7th May. We talked, moved, ate and sang together getting to know each other through theatre games while also discovering our playful selves. A highlight in those early sessions was Hassan and John playing the warring Dukes, trading verbal and non-verbal insults with each other. In Hassan we discovered a real talent for comedy and hope to be able to encourage this in future. Musically, Somi and Hammed joined us a bit later on, and together with their singing and his guitar playing, gradually worked up a fine repertoire of about seven different songs, some of them finding their way to the final performances.

“The partnership is providing a lot of opportunities for learning: about Shakespeare’s work, English language development, geography of Calderdale as they travel to rehearsals in the nearby countryside, and of England when they travel to the performance…The King’s Troupe have prioritised the language and musical, theatrical and cultural traditions of the participants homelands and weaved these into the play’s development. I believe this innovative approach improves confidence and instils dignity, pride and self-esteem, much of which are wrecked during the journey to seek asylum.” Lora Evans… 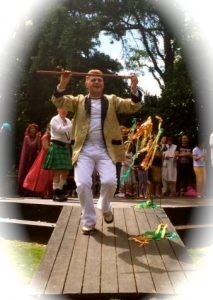 Thoughts along the way – There were all sorts of challenges both logistic and creative. For example, why attempt a multi-lingual production when doing it in English might have been considerably easier? Mary our Director wanted to continue the linguistic explorations started in a Bucharest shopping centre (Blog 1) earlier this year, hearing Shakespeare in Romanian for the first time. It was really interesting to explore this, and thus including Farsi in this production, together with our Iranian and Afghani friends from St Augustine’s, in addition to our fledgling Romanian company from Bucharest seemed logical and important. In addition, the diversity of a multi-cultural exploration of a cut-down text, including the linguistic elements brought out lots of questions about meaning and intention and character development. The rehearsal process also involved a good few animated skype conversations with our Romanian company about the text, pronunciation, meaning and character. Also, Monica’s work on a beautiful old Romanian song called ‘Crazy Forest’, that she had discovered and learnt for the Dell was very special indeed. The song was about the forest singing for the love of a young woman that she should not leave it.

“It was one of the most beautiful days of my life because I defeated my fear of being in front of many people and I felt the confidence of being comfortable playing and acting in front of people…like a personal victory for me”. Maria, 13yrs.

“It was very beautiful to play there and I was looking at those trees around and asking how it might be to do something similar at home”. Sinziana, 5yrs 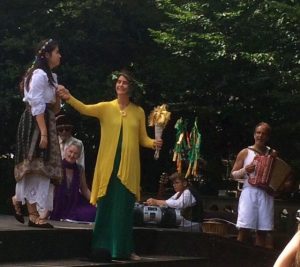 Themes of exile and reconciliation were really important both in the rehearsal process and the performance itself, as Lora Evans echoed in her long and very supportive letter to us, “Regular rehearsals have provided a space outside of their ‘normal lives’ (that are typically, chaotic, stressful, limited in their scope of new experiences). We know the benefits of access to green spaces and new landscapes for individuals suffering from mental health problems, traumatic histories, social isolation and deprivation”. The archetypal themes of exile and reconciliation contained in this play are very real and lived experience for our friends from St Augustine’s. We have as a company embarked on a new journey for us, making new friends through theatre-making that bring us closer together and that we will continue to develop. 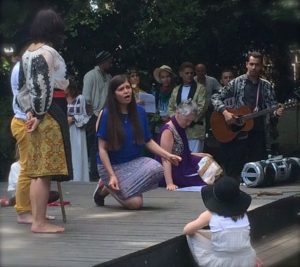 As a result of our theatre work in this exceptional Shakespeare anniversary year 2016, we now have fledgling King’s Troupe companies in Romania and France, needing encouragement, support and skills-sharing to develop their own unique styles of theatre-making. We have begun a partnership with St Augustine’s Centre which we will continue, with a recently hatched plan to perform ‘As You Like It’ at the centre in the coming weeks.

This is a really exciting way of working which can be replicated in many countries and cultures; community theatre-making in a most accessible way with the genius of Shakespeare holding it together.

“The project has undeniably hugely broadened the horizons of those involved. We at St Augustine’s Centre are very proud of what has been achieved, and grateful to those who have brought it into fruition.” Lora Evans…

Many thanks to the British Shakespeare Association from all in the King’s Troupe for the financial support they have provided for enabling this production to take place, by supporting our Romanian friends to come from Bucharest. Also to the Royal Shakespeare Company, Nicola Salmon, Ian Wainwright and colleagues who have once again given us this very special opportunity to come and perform on their Dell stage, and who have over the past 4 years encouraged our theatre-making and growth as a company through the Open Stages programme.

“The most important thing for me was finding this common language in a very free, playful and relaxed way. I felt we were putting pieces of our souls together and the final picture was like a very beautiful tapestry with love, acceptance and the joy of being together”. Monica, Bucharest